I’ve been aware of Wim Hof, the crazy Ice Man, for a few years now but have become increasingly interested in his methods since I adopted my own fascination with the cold. 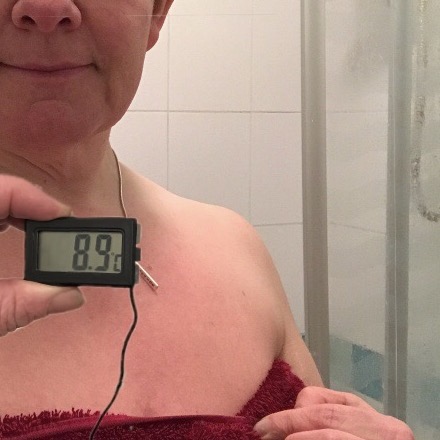 So far, my highlight of the year has been hacking our thermostatic shower so that it ceased to kick out any warmth. I think the teenagers in the house might call that “Breaking the Shower” but I’m happy. It means that I am now able to stand under icy torrents and disturb the household by squealing behind the locked bathroom door. It also meant I could finally sign up for the 10 week course in the Wim Hof Method, which requires a commitment to strange breathing and daily cold showers – squealing optional.

Wim Hof uses breathing techniques, really a controlled form of hyperventilation, along with cold exposure to exert control of his autonomic nervous system. Benefits cited are improved immunity levels, reduction in automimmune symptoms and improved healing. I’m happy to accept all those benefits but was particularly interested in what might be considered the side effects of the practice, such as cold adaptation, increased breath hold capacity, possible fat loss via BAT (Brown Adipose Tissue) activation and improved mental well being.

I’ve just started week 4 of the Wim Hof breathing course and thought it was time to give a brief review of my experience so far.

Week 1
Immediately you are required to adopt the daily practice starting with 3 hyperventilation and breath hold sequences to be followed by a cold shower. The cold showers start off gently, starting and ending with warm water with a 30 second cold interlude.

Despite regularly swimming in 2-8’C water, I found the showers to be a shock and the squealing did continue for a couple of weeks of the practice.

The breathing cycle is a bit odd. I don’t really like the experience of hyperventilation and associated tingling and light-headedness. I do quite like the challenge of breath holding though and by the end of week 1 I was very excited to have held my breath for just over 2 minutes. Before this point I felt I would burst after 40 seconds. If you don’t think this sounds like a long time just try it now, hold you breath and time it. I bet you won’t get anywhere near 2 mins.

In the associated video Wim also take you through some stretching exercises but I have to confess to not taking this bit very seriously.

Week 2
In week 2 we add an extra breathing cycle that ends in a breath hold (after the inhalation) where you perform as many push ups as you can before breathing again. You need to set a baseline number before you start – mine was 19 incline push ups. By the end of the week I managed to increase this to 30 without any breath. I find this quite fascinating and wonder if it will translate well to my powerlifting, perhaps if I hyperventilate before a squat, I will be able to knock out a few more reps.

Week 3
Week 3 feels like a bit of break through. Showers are now up to 60 second stints cold/hot/cold but I feel strong enough to handle 2 mins of cold only. Focussing on calm breathing I’m able to have my first silent shower and actually feel as though I am generating my own heat.

The breathing has increased to 5 cycles with the last being the push-up routine. I drifted off during the last breath hold and forgot that I was short of breath managing 2mins 6secs in total.

I haven’t managed to stick to doing all my practice on a daily basis but I try to do it as often as I can and don’t move to the next week until I’ve completed 7 sessions. I’m sure it is more effective if you can get into a consistent routine but life happens.

Having read “What Doesn’t Kill Us” I decided to play around with a pulse oximeter while doing the breathing routine. I read that Wim’s trick for ensuring that his team don’t suffer from high altitude sickness during rapid ascents of Mount Kilimanjaro is to monitor blood oxygen levels regularly and practice hyperventilation to keep the levels above 95%.

This instagram video shows me at the end of my hyperventilation and shows what my spO2 levels look like during the breath hold. 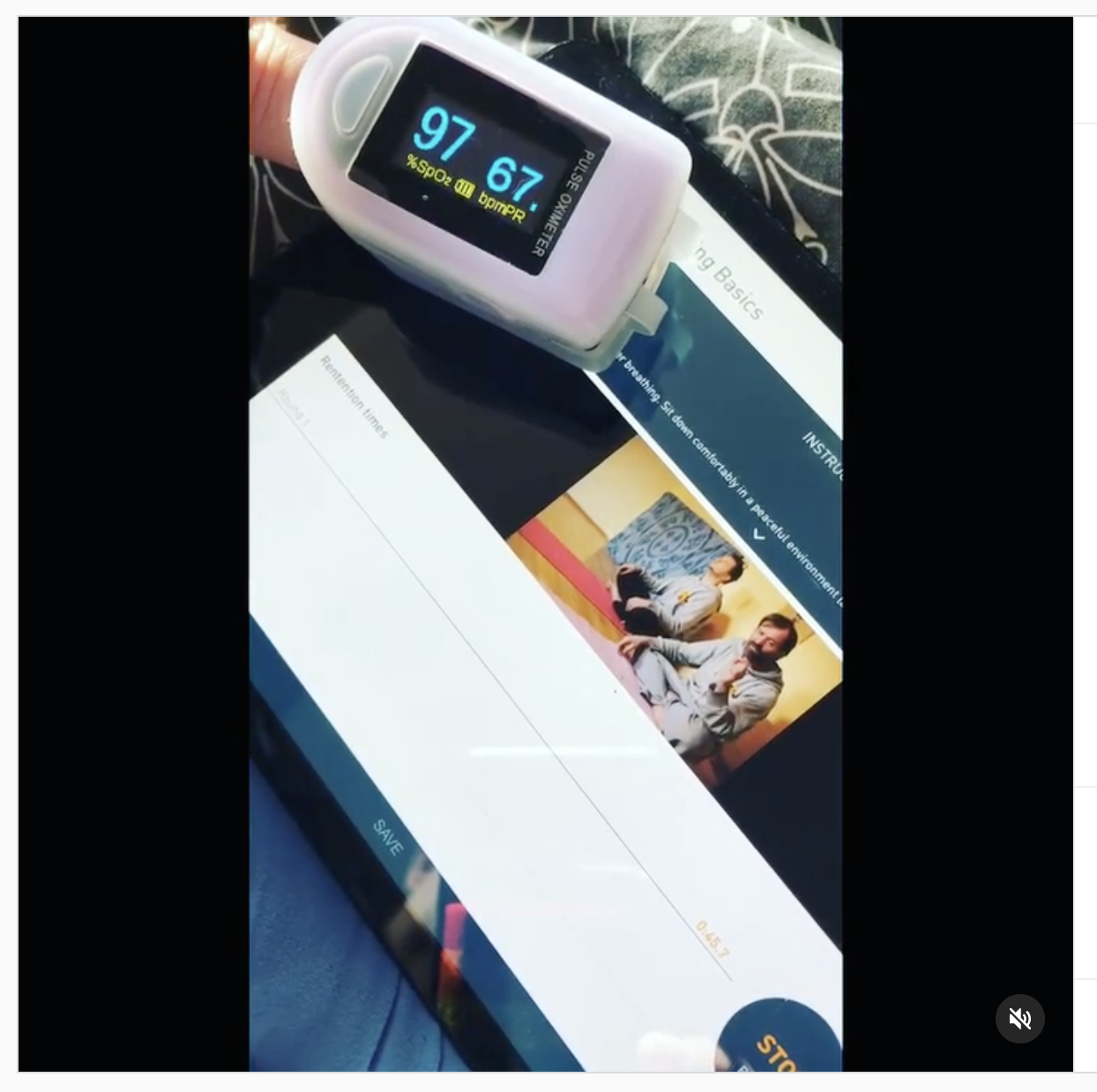 Do I have to sign up and pay for the 10 week course to practice the Wim Hof Method?

Absolutely not, although I wouldn’t discourage you if you’re tempted. I think it’s quite good value as courses go. You get a PDF copy of Wim’s first book, a course guide and workbook and permanent access to 10 hour long videos by the charismatic guy himself.

If you don’t have the money I would recommend spending £3.99 on the app and following the mini video for each breathing cycle. I find myself using this on a daily basis anyway and just watch the video once a week as a spur to action.

There are enough blog reviews that explain week by week what the schedule is. Basically 3-4 breathing cycles and a final one for breath hold press-ups. Daily cold showers of increasing length with the occasional challenge thrown in such as 10 minute cold showers or ice bath.

The videos also include a series of yoga type exercises but I have to admit that I rarely do this element of the course.

Where can I find out more about Wim Hof?

This video from Vice provides an excellent introduction to the mad cap ways of the Hof.

Wim Hof has used meditation to stay submerged in ice for hours, run a marathon in the desert with no water and scientifically proved that he can influence his immune system at will. In this new film, he taught us how all of this is possible.

Wim Hof is popping up on all sorts of podcasts nowadays but these are some of my favourites:
Ben Greenfield – Conquer the Cold
Tim Ferriss – The Iceman Interview 2015

Wim Hof has a couple of books out himself, the most recent one, The Way of the Iceman, being the most readable.
I really enjoyed What Doesn’t Kill Us, by author Simon Carney. Simon set off with the intention of exposing Wim Hof as a false guru but ended up absorbing his method and hiking up Mount Kilimanjaro in his swimming trunks.

Blogs about the Wim Hof Method

Twenty weeks with Wim Hof – Rose works her way through two 10 week cycles of the Wim Hof Method, the first was conducted as a DIY course using materials and advice freely available and the second following along to the online video course.

I’ve really enjoyed Alan Reiner‘s discussions on the nature of the Wim Hof method and his experience with the course, particularly because he has also hooked himself up to a pulse oximeter. I’m rather jealous that his always you to record data to a csv file.