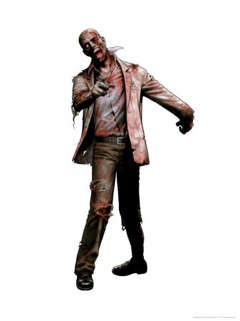 I’m Runner 5 and I’ve just been dropped into a zombie filled wasteland. It’s 11pm and I am, to put it politely, shitting myself.

I’m the sort of girl who curls into a ball at the mere suggestion of being chased. I may even scream a little.

So, I was a little surprised that I had been tempted to part with £5.49 in order to try out the latest GPS running app – Zombie, Run! Which seems to be a cross between Runkeeper and Resident Evil.

I was on a hill and to be honest I was quite tempted to walk, but the voice over had just kicked in to inform me that zombies had been spotted. It turned out to be the previous Runner 5. Unlike me she was a pretty good runner, only she’d been got by the undead and now she was trying to get me.

Steep hills are not the best place to try and outrun professional running zombies, not unless you turn round and sprint downhill. I will turn round next time. As it is she got me, just yards from the summit, there was a flurry of fast beeping and heavy deathly breathing. I dropped half the items I’d collected enroute, presumably as a distraction and then just continued running until the next chase kicked in.

Given that you don’t have to do anything on screen during a mission, the game play is remarkably engaging. You select a mission, slide to run and then you do just run and listen. The story unfolds and the commentary seems to fit perfectly between gaps in your playlist.

As you run along you hear that you’ve picked up items. My first was a snazzy pair of Y-fronts. You don’t actually have to bend and pick them up, and neither do you have to “run to the tower” or “head east out of the forest”. This is make believe, no need for screaming like a girl when the Zombies swarm but you do need to pick up the pace if you want to escape them. 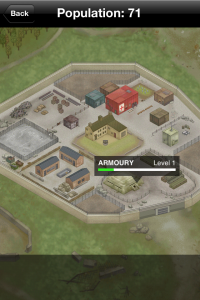 The first mission lasted about 30 mins and I managed to make it to a place of safety with a few items left intact. Back home I was able to “play” with the app, dragging my items onto areas of the compound – increasing their rating as I did. Not really sure what the point of that is at the moment, I believe it opens up new missions but all that will unfold as I play it a bit more.

It’s an expensive app but it’s pretty accomplished and looks to have an active development crew. The accelerometer mode is already available to try out which means Zombie, Run! will work on a treadmill without the need for GPS engagement. 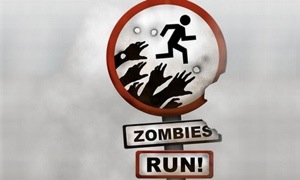 The app keeps a record of your missions so you can review your typical running stats as well as reviewing the number of times the Zombies got you! You can’t as yet review the GPS route, so there is no mapping functionality and I don’t think they’ve built in any social interaction so you can link up with other terrified runners or upload the GPS data to web logs.

This review by Doug is the best I’ve found so far.