I love collecting data, in fact if running didn’t lend itself so well to data collection and analysis I may well have made a different choice back in 2005 and taken up watching baseball instead.

I’ve jumped onto every method of self quantification since taking up the sport – gps, pace, heart rate, weight, body fat, blood pressure, pulse oximetry, almost all of which have required the purchase of some whizzy new gadgetry. So when I was offered the chance of looking a little deeper to understand my performance, or lack of it, I jumped at the chance.

Curoseven seem to be one of the few practices in the UK that offer functional blood testing for performance and recreational athletes. They have a fairly flexible approach and can provide a number of packages with a range of blood markers. I opted for the weight management package, just in case it revealed any top secret clues that could help me shift a few stone.

A standard performance screen would differ slightly but you would expect to see a variety of biochemistry and hormonal values reported against functional ranges (different to the disease ranges used by your GP) alongside a report that indicates any areas of concern along with recommendations that may include dietary, supplement and/or exercise advice. The tests are quite expensive, ranging from £299 – £599 but as yet I haven’t found a cheaper way to access my blood results.

Dr Tamsin Lewis (@sportiedoc) is one of the founders of Curoseven and as the Ironman UK Champion and medical doctor, she is appropriately qualified to advise on performance.

I was keen to set this first test up as a benchmark from which I could monitor changes in any future test, so I nipped into London to have my blood samples taken at an extremely efficient Harley Street clinic and was out again in about 15 mins. 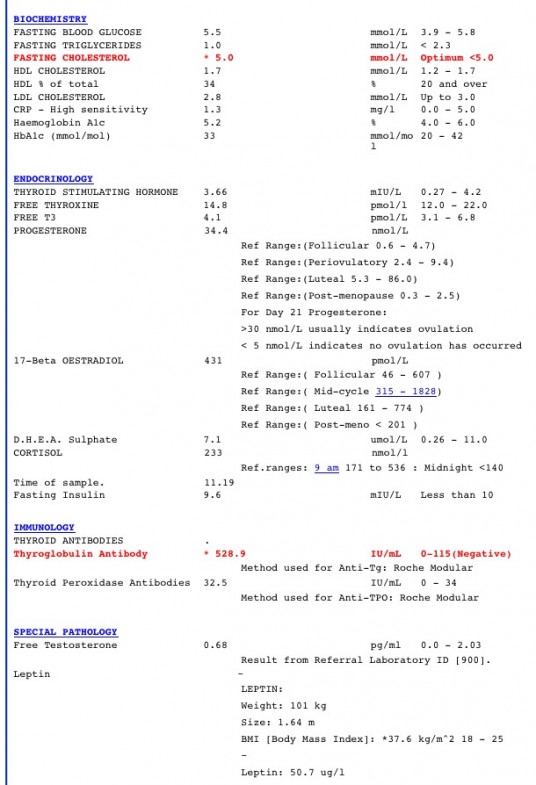 The results took about week but when they arrived I was rather surprised to discover that I’d acquired a disease. Apparently my immunology results revealed that I have an autoimmune disease called Hashimoto’s Thyroiditis. My body is slowly attacking it’s own thyroid and not surprisingly this doesn’t help my performance.

I wasn’t really expecting that sort of news, although in retrospect I have been able to remember all sorts of symptoms and ailments that I can now pin on my new disease. The fact is, if I had not been fascinated by the thought of collecting my own blood data, I would not have found out about this for a long time.

The usual progression in Hashimoto’s is for the thyroid to be increasingly damaged by the bodies own immune system. It responds initially by working harder to produce thyroid hormones until eventually it can’t keep up and you go hypothyroid. I currently have very low level symptoms but my level of inertia would have meant my thyroid would have been pretty much eradicated before I decided to see the GP. Then I would have had to factor in further delays while they fathomed out what was up with me.

Thanks to this blood testing I now have the opportunity to research the condition and take action to hopefully prevent the decline in my function and possibly arrest the autoimmune response. As it happens, conventional medicine isn’t in any great rush to treat Hashimoto’s. They tend to ignore the autoimmune element and wait until the disease has wrecked your thyroid so they can top you up with replacement hormones.

I consider myself incredibly lucky to have been given the heads up on this. I must have been given months (possibly years) of a head start and I’m making the most of it by adjusting my diet to reduce the inflammatory response and I’m just about to go and get a second blood test to see if a month of going gluten free will have had any impact on my antibody levels.

Here starts a whole new world of n=1 experiments (aka self experimentation).