I love this event, it is a complete pain to get to, it costs a fortune, it’s almost impossible to get out of South Shields before night fall, but it still remains the highlight of my year. Grubby street urchins high fiving you, toddlers squirting bottled puddle water at your feet, spectators cheering and offering out ice pops, pizza and vodka. The folk from South Tyneside really get into the spirit of this event and you can’t help but feel privilidged to be part of it. At times through the race the emotion gets the better of me and I have to fight to stop myself blubbing.

I couldn’t fathom a way of setting myself a target for the 13.1 mile distance on the forerunner 405 so instead I had to set the pace of the virtual trainer and just watch my progress against my shadow. Being a “tad” heavier and not having shown an immense amount of commitment to my training this year I thought the best I could hope for was to aim for a 3:05 hr finish and so set the training buddy to 14min/miles. With the watch stuck on this screen I couldn’t tell what pace I was running at and so effectively ran the race blind. At each mile mark though I seemed to be gaining minutes on my buddy – I was kicking virtual sand in his face.

At mile 7 as was hosed down by a teenager in full firemans garb, it coincided with the end of the first episode the Archers and its replacement by P!nk’s “I’m Not Dead”. The combined effect was so refreshing that I experienced the best 20 seconds running of my life. I overtook walkers and everything!

Unfortunately in a half marathon, there is no escaping mile 10, it arrives like a soggy duvet and throws itself around your legs. At this point I was 9 minutes ahead of my target but with the duvet around my ankles I was losing minutes every few hundred yards. I was cracking up but at this time last year I had to step of the sideline to perform first aid on my thighs, something must have improved despite my preparations.

At 11 miles I had slipped back to only 6 minutes above the 3:05 target but I was smelling the sea air and getting all emotional again. My folks had driven down to catch me cross the finish line and started to feel a pb in my bones. I upped the pace at the 12 mile marker and kept looking down at my watch to see if I could get that the distance between me and my shadow to increase. It started to happen and I felt strength in my legs.

That final mile was exciting for me. It was just like the final leg of the Bushy park run, giving it all for a chance at some glory. At 7 minutes ahead of target I was struggling with my maths again to see how much I had to do to beat last year. The finish was coming upon me so quickly I didn’t think I had enough distance left to make the time but I was willing myself on anyway. 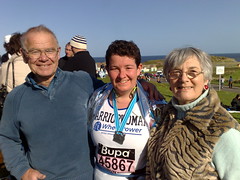 I crossed the line in 2:57:00 about 50 seconds slower than last year. Not a pb but I was so chuffed that I’d come anywhere near it. Here’s my thank god it’s over shot, I don’t think I look quite as happy as last year but then OGB had gone AWOL. His training had been a bit lacklustre as well but at the start line he’d decided he was going to push it anyway. When he wasn’t sitting at the agreed meeting point with my pint in his hand I assumed he must have been carried off in a helicopter. I was probably wondering what I was going to tell his mum as the photo was taken.

We found him eventually in an emotional heap after spending about 45 mins battling in the baggage bus for our clobber. Shoes and bags and shirts had been strewn all over and it sounded a bit like a blood fest. Luckily I got to avoid all that – that’s the benefit of running with fast friends, thay get to collect the bags while all you have to do is struggle over the finish and stumble into the nearest fish and chip restaurant.